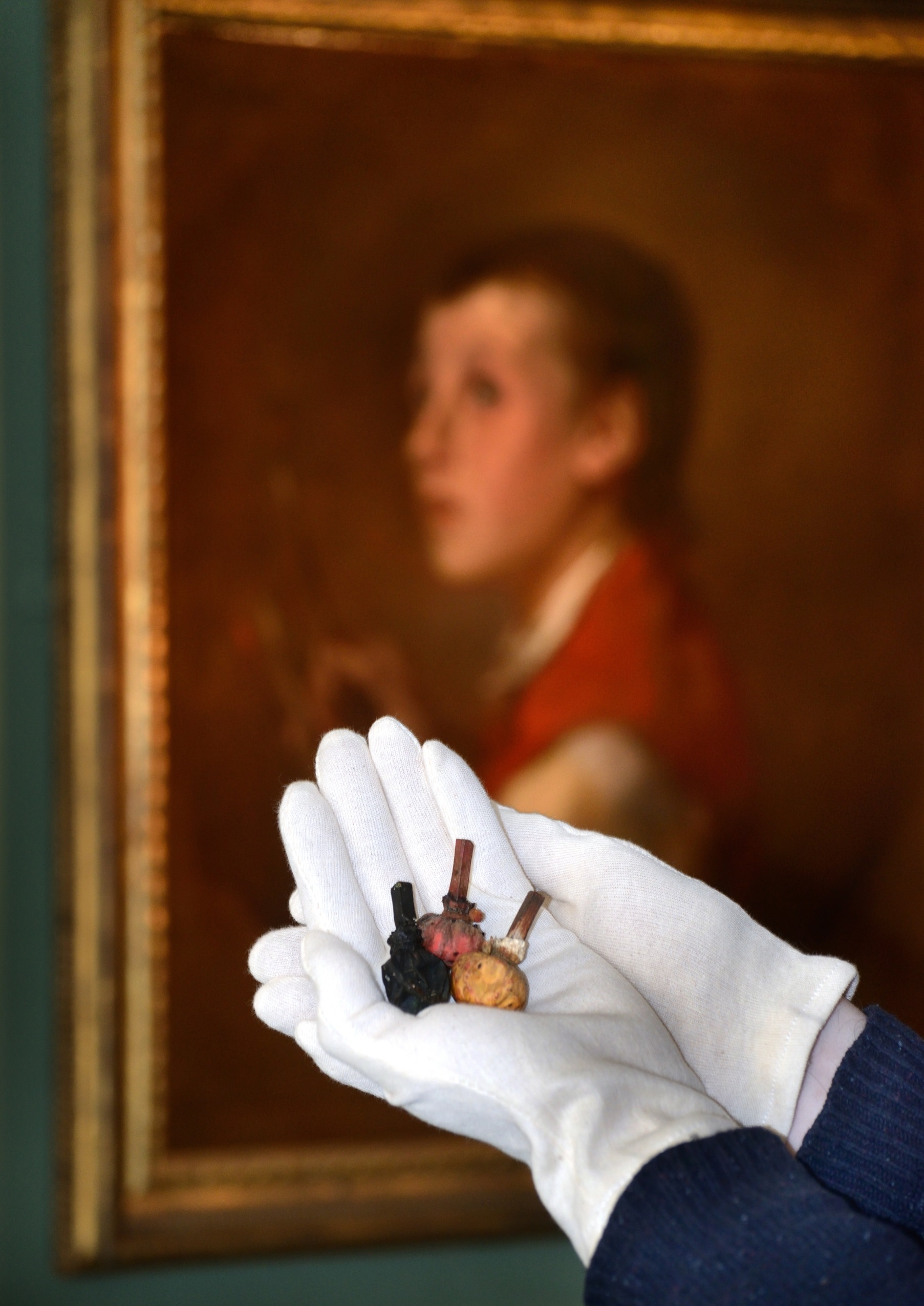 In 1966, in the attic of Gainsborough’s House, an eighteenth century shoe was found alongside nineteen small organic packages. It turned out that these were paint bladders, those used by artists in the eighteenth and early nineteenth centuries to store paint before metallic paint tubes were available. To find such a large number of bladders together was rare, representing a large palette of colours, some still having their original French labels. Of course the questions that immediately came to mind were: How were these used? What can they tell us about artists work in the eighteenth century? and Could these have been owned by Thomas Gainsborough? In fact they sparked a whole project funded by the Esmée Fairbairn Collection Fund and a private donor that investigated these bladders and the whole question of artistic practice in the eighteenth century. The research was carried out by conservators from the Hamilton Kerr Institute at the University of Cambridge, academics and Gainsborough’s House staff. The findings were made public at a conference organised and hosted with the Paul Mellon Centre for Studies in British Art.

On 29 October in London and 30 October 2015 in Sudbury, the conference explored the distinctive world of the Georgian painting room, and complemented an exhibition of the same name at Gainsborough’s House. The exhibition explored the Georgian painting room, which was predominantly the room in a domestic house. At the heart of the exhibition was the innovative re-creation of such an environment. Containing elements that would have been typically found in such a room, silk backdrops, classical busts and an écorché (a sculpture of a human figure with the skin removed to display the muscles). It also included Sir Joshua Reynolds’s easel and sitters chair, Sir Thomas Lawrence’s paint scraper and Lord Leighton’s mahlstick kindly loaned by the Royal Academy. Appropriately The Painting Room re-creation was positioned next to a northfacing window, favoured by artists for producing an even light throughout the day.

Several questions have been raised by this project. Should Gainsborough’s House use re-creations and create period rooms in the future? In answer to the question could the paint bladders have been Gainsborough’s own paints, Dr Spike Bucklow of the Hamilton Kerr Institute writes: ‘We must conclude that the French paint bladders could have been purchased in Thomas Gainsborough’s lifetime and scientific analysis produces nothing to prevent us speculating that they may indeed have been used by him.’