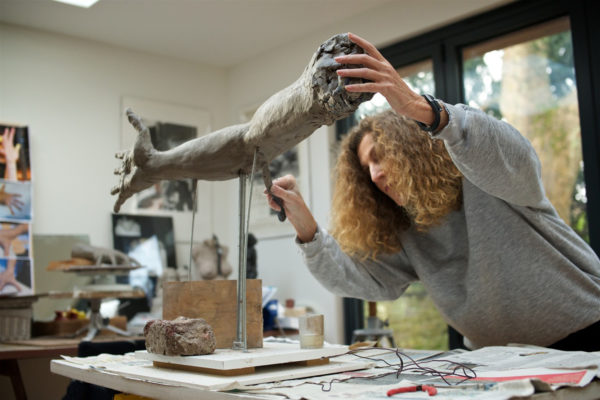 In 2015 Nicole Farhi, sculptor and former fashion designer created a bronze bust of Thomas Gainsborough for Gainsborough’s House. Four years later we are delighted to announce a solo exhibition of sculptural portraits of heads and hands by the artist.

The exhibition includes busts of some of the great artists of the past 100 years including Lucian Freud (1922-2011), Francis Bacon (1909–1992), but perhaps most notably, Sir Eduardo Paolozzi (1924-2005), Nicole Farhi’s great friend and mentor. Influential figures from stage and screen are represented through the heads of Sir David Hare, Tom Stoppard, Judi Dench and Helena Bonham Carter.

Talking about the process of creating her work, Nicole explains that the portrait busts emerge from a sitting in the studio where photographs are taken of the subject.

‘I then start building an armature and after a few hours sculpting in clay the structure of the face will appear or not … Once I have the structure the true character will follow –sometimes days later, weeks, sometimes months.’

Importantly the exhibition also includes portraits of hands and, like the heads that they accompany in this exhibition, they show character and reflect the life and work of the sitter. They portray the dexterous hands of musicians, graceful hands of dancers, the experienced hands of a sculptor and the joyful hands of children.

‘Hands’, Nicole says, ‘can be even more expressive than the face. They can tell you everything about who the person is, what they are like, what they do.’

A sculptor for nearly thirty-five years Nicole studied with Eduardo Paolozzi and has exhibited widely. Her depiction of artists and cultural figures led to the creation of the bust of Thomas Gainsborough, which Nicole presented to Gainsborough’s House.

Image: Nicole in her studio