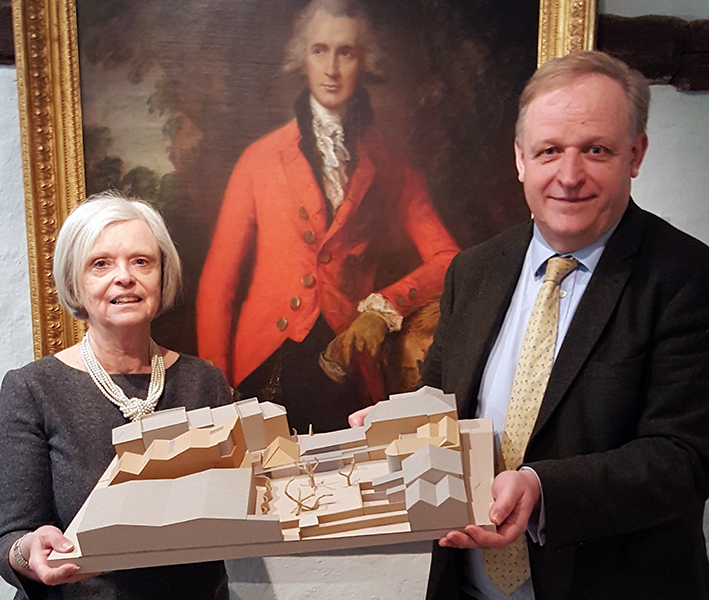 We are delighted with the news that Babergh District Council will be gifting Gainsborough’s Chambers in Sudbury, purchased in 2014 for £235,000, to Gainsborough’s House Society, free of charge.

At a meeting in February 2018, Babergh’s Cabinet voted to gift the building to the Society, which runs Gainsborough’s House, as part of our project Reviving an Artist’s Birthplace – A National Centre for Gainsborough.

Council officers will now begin working to transfer the ownership of the property to us, to allow it to be fully incorporated into the project’s £8.7 million investment in the regeneration of the centre of Sudbury.

Our economic impact assessment forecasts that the Reviving an Artist’s Birthplace project could provide 60 temporary full time equivalent (FTE) jobs, nine permanent FTE jobs and 20 indirect FTE jobs. This would be part of a wider economic impact, once the project is completed, of £2.9 million gross value added (measuring the contribution to the local economy) per annum, a 72% increase on the museum’s 2015/16 impact, including an additional £1.02 million predicted spend on goods and services in the local area.

Gainsborough’s Chambers, which previously housed a Labour Exchange, is on Weavers Lane in Sudbury and adjacent to Grade I listed Gainsborough’s House. It has been leased to us by Babergh District Council since April 2014, at an annual rent of £12,000.

Cllr John Ward, Leader of Babergh District Council and chair of Babergh’s Cabinet, said: “We’ve always been very keen to support Gainsborough’s House and the fantastic work it does: that’s why we bought this property in 2014. Since then we’ve leased it to the Gainsborough’s House Society, but the time has now come for them to take over completely and I’m delighted that we’re able to gift the property to them. Their Reviving an Artist’s Birthplace project could have a huge impact on Sudbury, both cultural and economic, and we are proud to be a part of that.”

Mark Bills, Director of Gainsborough’s House said: “It was only thanks to Babergh District Council’s purchase of the site adjacent to Gainsborough’s House that our vision to create a National Centre for Thomas Gainsborough even got off the starting blocks. So we are absolutely thrilled, as we take the final steps towards securing this £8.7 million investment for Sudbury, that the council has decided to so generously gift us this land.

“It really means a lot to us and also shows how much the council and the local community supports our vision to make a real difference to the town, its residents and businesses. It’s terrific news and brings our  project another step closer to reality.”

Reviving an Artist’s Birthplace – A National Centre for Thomas Gainsborough is an £8.7 million project, supported by the Heritage Lottery Fund which has earmarked £5.2 million towards the project. With thanks to widespread support, Gainsborough’s House Society has so far gained donations and pledges worth over £8 million.